Find out what's inside the July issue of Rugby World magazine

THE NEW issue of Rugby World is the perfect accompaniment to this month’s summer tours. Big names from the northern and southern hemispheres – Danny Care, Liam Williams, Andrew Trimble, Chris Cusiter, Israel Dagg and Felipe Contepomi among them – look ahead to the Test series, Stephen Jones analyses the major issues ahead for each of the home nations and we go back in time to recall a few comedy tales from tours gone by.

We also have a special report into why there aren’t more black Springboks, and head to Samoa to speak to the country’s prime minister about rugby there. Plus, in the 17th edition of RW’s unrivalled Champions section we pay tribute to all this season’s league winners.

The summer tours’ big talking points, five players to look out for at the Junior World Cup, 30 minutes with Ireland’s Jordi Murphy, RWC 2015 qualifiers and the European Nations Cup

Liam Williams – He’s the class clown, but Wales’ coaches are starting to take the Scarlets full-back seriously. Watch him talk about his team-mates here

South Africa – Why aren’t there more black Springboks? We investigate

Israel Dagg – The All Black talks salmon, siblings and snoring

Samoa – It’s a battle for the islanders to stay afloat, but they’ve got some VIPs on their side

Fitness – How to build up your strength over the summer

Mini rugby – Building a scrum from scratch and a passing game 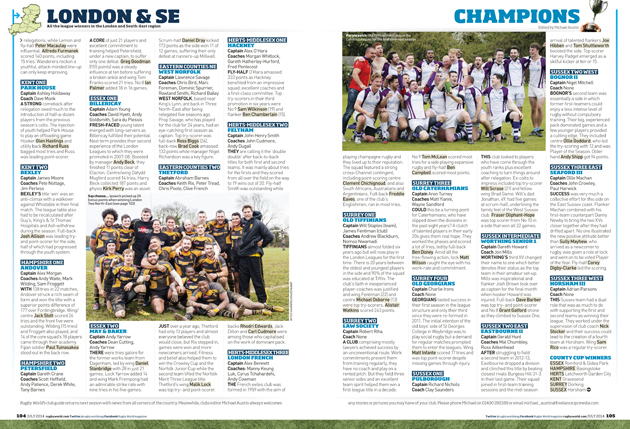 Champions section – All this season’s league winners, plus our 2014 Team of the Year and a round-up of schools news. See who made our All-Stars Schools XV here

Tour Tale – This tourist had a false start…